Dr. Saylor, along with many other of today’s leading dentists, is convinced that the mercury alloy, amalgam, is very toxic and does not belong in your mouth. Silver fillings are 50% mercury and this toxin is released when chewing, grinding the teeth, brushing, etc. Any stimulation that heats amalgam releases mercury vapor.  This vapor is tasteless and odorless, so a person has no idea that they are constantly ingesting this toxin.  One of the scariest characteristics of mercury is that it can be ingested orally, inhaled, or absorbed through soft tissues. 80% of inhaled mercury is absorbed, passing quickly from the lungs to the bloodstream and circulating throughout the entire body. Amalgam has been commonly utilized for many years as a dental restorative material with ignorance to its ill effects on our bodies. Better materials have been developed, especially over the last decade, and amalgam fillings are no longer the top choice in dentistry. Now, most providers are leaning towards an amalgam-free practice and primarily utilizing composite resin, a non-metallic, tooth-colored filling material. 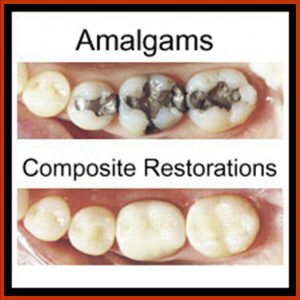 Millions of people have silver fillings in their mouths and are under the impression they have “never had any problems” or side effects from these restorations. Increasingly, dentists and patients alike are realizing that symptoms like the ones listed below could be attributed to long-term mercury exposure from amalgam fillings:

Mercury is an extraordinarily powerful and cumulative poison that can deplete the body of essential antioxidants, rapidly diminishing a person’s health. Diseases related to chronic mercury poisoning include:

The best way to prevent or combat mercury exposure is to have your amalgam restorations removed and upgraded to a composite resin material. Removal of the filling generates heat, releasing mercury vapor and other alloy dusts into the oral cavity and ambient air supply, so extreme precautions  in the dental office must be taken when amalgam restorations are removed.

Protection from mercury exposure is important for everyone, but is especially essential for:

The possible mercury exposure is but one of the many reasons to have your amalgam restorations replaced. For more information on how Dr. Saylor safely removes amalgam restorations, see the neighboring blog article titled, “Safe Amalgam Removal”, or reply to this blog post.