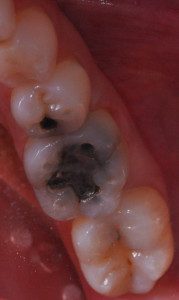 decay is routinely found under these old silver/mercury fillings 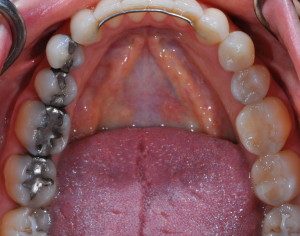 Half of this patient’s mouth has been restored with composite. 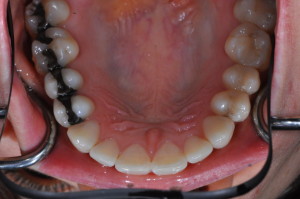 Which would you prefer?

In recent years, this question has created a great deal of controversy amongst dental professionals. For some, there is the overriding belief that the mercury found in silver fillings is contributing to patients’ health problems including Alzheimer’s, memory loss and leukemia to name a few. While others believe that silver fillings are harmless to the individual, and as a result continue to place them on a regular basis.

However, it is my belief that the truth lies somewhere between these two.

The reality is that the “detrimental health effects” of silver fillings have not be proven by scientific evidence. In fact, while silver fillings are nearly 50% mercury – a very toxic substance in gas form – when combined with other metals, such as those in a filling, a stable substance is created.

The real concern then, is that when patients chew mercury gas is released as a result of the friction with opposing teeth. Yet, while there is solid evidence to back this claim I do not believe that patients should rush to their dentist to have these fillings removed.

This reasoning is twofold.

For starters, while removing these fillings may contribute to a patient’s health, the patient will not become healthier just by removing them. Exposure is chronic and at such a low level that removal alone will not improve an individual’s condition.

Second, removal can be more harmful than long-term exposure if it is not handled properly. That is because patients are often not protected from the mercury gas that is created when these fillings are removed.

However, if the fillings are intact, sealing the tooth and functioning well, I would not recommend having them removed for health purposes only. The majority of patients I see have had these fillings in place for more than 20 years and have not experienced any deleterious effects.

If the concern is there, it is best to speak with your dental health professional before taking any action or creating a scare. By examining the filling, the dentist will be able to identify any need for correction and create a game plan for removal, if needed.

Mercury-Safe Removal
If it is ultimately determined that your silver fillings should be removed, ensuring that your dentist employs a mercury-safe protocol is key. This process will protect both you and your dentist from the mercury exposure that occurs at removal, and will include a number of key components.

While these simple precautions may take a little extra time, they are of no additional cost to the patient, and go a long way in ensuring a safe removal. Removing silver fillings in this manner is a priority in our office, as patient safety is paramount.

For more information on the safe removal of silver fillings, call us at 813-689-4226 to schedule a consultation today.

Larry Saylor D.M.D. > Blogs > Should You Have Your Silver Fillings Removed?